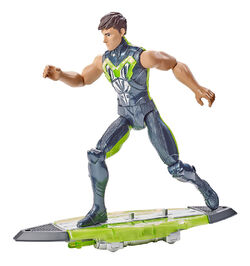 Wave Blast Max Steel is one of Max Steel's action figures released in the second wave of action figures. It is a part of both Connect-Tek and Turbo-Warriors sublines.

Max wears a sleveless dark blue wetsuit with a green transparent logo with the shape of the letter M on his chest, silver markings on his abdomen. His back is also green. He comes with one accessory and has twelve points of articulation.

He comes with a green and grey surfboard that can launch a pair of projectiles and has two pegs on it so Max can stand. It can be also stored on Max's back.

Retrieved from "https://max-steel-reboot.fandom.com/wiki/Wave_Blast_Max_Steel?oldid=29695"
Community content is available under CC-BY-SA unless otherwise noted.