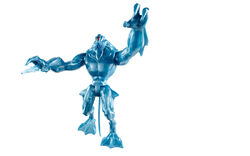 Water Blast Elementor is an action figure of Water Elementor. It was released in the second half of 2013 and belonged to the Strength subline.

Elementor's body is completely blue with light blue accents. He has a red energy core on his forehead, a pair of white lozenge-shaped eyes and spiky teeth. He has a muscular build and fins on his forearms, thighs and a tail, four fingers and three toes. He has four points of articulation and comes with one accessory.

Elementor comes with a blue water projectile which can be shot by his right hand. He also can shoot water by pressing his abdomen.

Retrieved from "https://max-steel-reboot.fandom.com/wiki/Water_Blast_Elementor?oldid=30122"
Community content is available under CC-BY-SA unless otherwise noted.