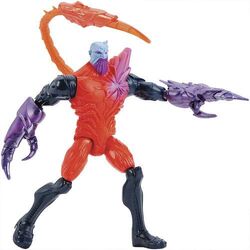 Venomous Scorpion Extroyer is one of the character's action figures. It was released in 2018 and belongs to the Connect-Tek subline.

Extroyer has a pale purpish skin with purple eyes, purple teeth and his jaw is entirely made out of crystals. The left part of his mouth also has a scorpion prey. His torso and thighs are red and he has many crytals protuding from the left side of his chest. His upper arms feature black shoulder pads and black armor. Rather than having human hands, both of his hands are purple scorpion claws, with his left hand having few crytals protuding from it. He also wears black boots. He has eleven points of articulation and comes with one accessory.

Extroyer comes with a scorpion tail which can fire a missile. It can be also inserted into any of his Connect-Tek ports of his body.

Retrieved from "https://max-steel-reboot.fandom.com/wiki/Venomous_Scorpion_Extroyer?oldid=29958"
Community content is available under CC-BY-SA unless otherwise noted.