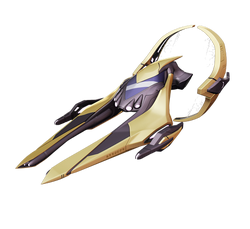 Ven-Geance is a spaceship used by Ven-Ghan that carries his large arsenal of weapons and allows him to travel to different galaxies to hunt his enemies. It debuted in Ultralink Invasion Part One.

The ship's origins are completely unknown, but it was probably given to or built by Ven-Ghan in his first years working for the Black Star Council.

The ship is used as a teletransportation for Ven-Ghan and it carries his large arsenal of weapons. The ship is shown to be very fast and is powered by an unknown fuel that feeds off electromagnetic energy fields. The Ven-Geance is able to travel at light speeds, has a intergalactic target tracking system, a unique teleportation system, gravity-seeker based missiles, stun blasters, gravity pulse laser and interior set black hole portal.

Retrieved from "https://max-steel-reboot.fandom.com/wiki/Ven-Geance?oldid=30407"
Community content is available under CC-BY-SA unless otherwise noted.