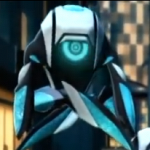 54 Edits since joining this wiki
December 9, 2014
Yo, I'm Monkey, just your adverage obessive fan who at some point feel in love with the Max Steel reboot. Maybe it's because I loved several other Nerd Corps Entertainment shows, maybe it was the handsom snarky characters, maybe it was becasue ROBOT ALIENS.

Please tell me Season 3 is true. Apparently here in Australia we got the first english airing so while they did end it on a closed note, there are several lose ends that would make a great season 3! (The Black Star council please.)

And Artist and a Dreamer

Hmm, Guess I have nothing better to do than talk about head-cannons, fan characters and AUs.

Ven Ghan mentions a Dakma in his first appearance,using it as insult on about the way Max attacks with Strength Mode. From that I assumed it to be very large, bulky and charges with physical force. So I designed them with thick flat skulls and short thick horns, with the majority of the bulk coming from the two sets of arms where they can use one set to run on all fours and still have a set to fight with or grapple. They have snail like eyes, being they can extend them to see almost all around them, but can pull them in when attacking head on. They can also be rather dexterous, but they only have 4 fingers.

Dakma's can also have cybernetic devices bonded to the spine, so if they have an over exess of bulk from other enhancements, their spines don't suffer for it.

ThorinSao himself tried to take a peacful life as a trader, and ened up having contact with Tachyon who traded him TURBO charged rocks, which he engineered into weapons and and a boost system in his ship. After the planets destruction, his TURBO stash began to dwindle, and his only choice was to try find Ja'em.

Retrieved from "https://max-steel-reboot.fandom.com/wiki/User:InsaneMonkey46?oldid=16840"
Community content is available under CC-BY-SA unless otherwise noted.