This page is about the race. You may be looking the verb Ultralink. 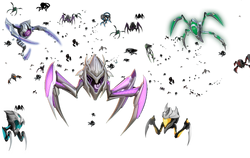 Ultralinks (also known as The Makino) are an alien race of small, sentient bio robotic parasitic aliens created by Makino, constituted by organic technology. Most of the Ultralinks were created to absorb and expand like Makino and to do so they usually appear seeking hosts to link with in order to create monsters to make Makino's army stronger. Eventually, some Ultralinks like Steel and Turbolt betrayed Makino and were hunted down by other Ultralinks, since they were considered traitors.

The first Ultralink ever seen (Steel) appeared in Come Together Part One and in Season 2 they appear as the main villains with the goal of absorbing and destroying Earth.

This section is under construction. Help Max Steel Reboot Wiki by expanding it.

Years ago, an alien scientist who was studying floating technology created Makino, which he considered as his most perfect creation. With limitless powers, Makino was created for one purpose: to absorb and expand. Despite the scientist's assistant being extremely reluctant in keeping Makino, the alien ignored and mentioned its incredible powers, such as his ability of regenerating himself and finding a host, even on its death. After realizing his immense potential, Makino linked with his own creator and killed his assistant. [1]Interestingly, the latter had a similar structure to that of an Ultralink, as he was capable of floating and had a similar body structure.

Afterwards, Makino started to expand his empire and started to attack many planets and eliminate innocent lives in the process. With the help of the Alphalink, a giant planet-like device that assisted Makino in his mission of absorbing and expanding, he absorbed many planets. Thanks to these actions, the Ultralinks gained a bad name, being depicted as villains. These actions also resulted in the creation of the Black Star Council, an organization of aliens that survived from Makino's attacks and joined forces to bring him to justice.

The main ability of the Ultralinks consist in linking or bonding with objects or beings, where they enhance their abilities by assimilation.

The Ultralinks are capable of linking with practically everything in their way, such as dead animal skeletons, rocks, humans, technology, etc. When they bond with their target, they convert them into living weapons by enhancing the host's powers considerably to reach the maximum potential for destruction. For example, a Bone Link could easily lift a N-Tek tank with his hands.[2] They have unlimited stamina, being capable of fighting during hours without needing to rest and are extremely durable. Additionally, when they are linked with something, their connection cannot be easily broken, especially if it is a human, only if they suffer a emotional impact.[3]

In their regular form, they lack resistance and can be easily destroyed with a shot of a N-Tek blaster.[4] In contrast, they are significantly smarter than humans and are really fast, mainly when they find a host to link with. They are also capable of shooting energy lasers through the tip of their arms. When they are linked with something, their weak spot is located on their forehead, where the Ultralink is usually located. If the sphere is hit by something, the Ultralink will suffer considerable damage, staying distracted for some seconds and allowing their foes to attack.

The Ultralinks are also vulnerable to the Ultralink Hunters' weapons and technology, which are capable of undoing the connection of the Ultralink without damaging the host at all. When the Ultralinks are removed from their hosts, they slowly lose the memories while they were under the control of the parasite, as stated by Maxwell McGrath in The Wrath of Makino.

Additionally, the host of the Ultralink is usually referred as "link slave".[5]

The Ultralinks are small, robotic, parasitic aliens, with some of them having around the same size of a human head and possessing only one eye. There are many different types of Ultralinks, each of them having different shapes and colors, with some subspecies possessing color variations in which the Ultralinks have an specific ability, such as being faster than the standard model or being able to turn invisible. They usually appear floating and on groups. They come from the Ultralink spheres, which are stored on the Makino deployers and upon being sent to the battlefield, the sphere explodes and leaves triangles with the respective color of the Ultralink.

Through their information screen, they can analyze their host's potential for destruction and if it is suitable for them, they "explode", generating triangles around them and quickly going to their host's direction. When they start the linking process, many triangles appear and start to form the shapes of the body's host or armor. After doing so, they often appear incrusted into the host's skin in the forehead region or where the head should be, which is the case of Makino's linked soldiers such as the Bone Links, Gun Links, Tank Links and others. In humans, they partially change their appearance by introducing armored parts around their body, veins with the respective color of the Ultralink (albeit in a darker shade) and giving weapons to them, which are always based on the object that the host was holding prior to the link. For example, Kirby Link has three containers of soda on his back, which was formerly a cup of soda.

They are capable of perceive when other Ultralink is operating abnormally as seen in Lights, Camera, Max!, when several Ultralinks realized that Extroyer's Ultralink was operating in a undesirable way. Damaged Ultralinks also tend to bond with hosts, despite their malfunction.

They often show an agressive and quiet behavior, attacking in every opportunity given and are shown to be able to speak, although they rarely do so. They have a violent and competitive nature towards each other (as seen in Torbolt The Terrible, when two Ultralink monsters were fighting over each other to determine who was going to eliminate Steel and Turbolt) and they fight for Makino's glory, even if this means their end. However, there were few Ultralinks who were able to break free from their leader's control, such as Steel and Turbolt, and choose their own path, resulting in extreme anger and a feeling of betrayal for other Ultralinks. According to Makino himself in Makino Strikes Part One, Ultralinks weren't programmed to choose, only to obey.

They also go through intense training to improve their skills, as seen in Torbolt the Terrible when the titular character and other two Ultralinks were on a simulator testing their shooting skills.

Ultralinks are genderless and it is unknown if they are capable of breeding, but they are most likely created through artificial means. They also have male and female programming.

There are superior types of Ultralinks known as Megalinks, who are responsible for finding hosts for them and have an actual body without needing a host. They can also absorb other Ultralinks into their beings to increase their power, like Metallak did with Ultimate Elementor and created Mega-Elementor.

The Ultralinks are divided into different subspecies, each featured by a marking characteristic, such as an ability or body part. For example, the Stealth Ultralink's name comes from the fact that they can turn invisible.

Community content is available under CC-BY-SA unless otherwise noted.