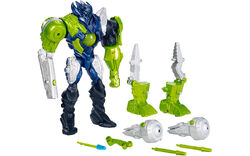 Ultimate Attack Makino is an action figure based on Makino. It was released in 2015 in the first wave of action figures, and is a part of Connect-Tek line.

In this toy, Makino's armor changes to a grey and green version, being them based on spatial devices. After all, some parts of Makino's original armor are preserved, like the boots and head. The figure has nine points of articulation, and comes with four accessories, and three projectiles.

Like all Connect-Tek action figures, this one has holes that helps the accessory to fit. The figure comes with a pair of green "boots" that can be inserted into Makino's feet, two grey launchers that respectively launches two green missiles. Also, the right arm of Makino is a cannon that is able to launch one projectile too.

Retrieved from "https://max-steel-reboot.fandom.com/wiki/Ultimate_Attack_Makino?oldid=18720"
Community content is available under CC-BY-SA unless otherwise noted.