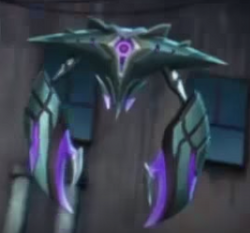 Tweezer Ultralinks (unofficial name) is an unnamed subspecies of Ultralinks. One of them appeared for the first time in My Best Friend is an Ultralink.

My Best Friend is an Ultralink

A Tweezer Ultralink bonded with Butch and as result Butch Link was born. He mercilessly attacked Max Steel and attempted to join Makino's forces once again, but before he could Ven-Ghan unlinked him from his host after Max made Butch remember about how he loved to dance. The Ultralink sent to the Black Star Council, where he presumably destroyed for its crimes.

The only known variation. Not much is known about it.

They shape of their body resemble the letter T but with sharp edges. They have a pair of dark grey saliences on the top of their body and they have purple tweezers for hands.

Retrieved from "https://max-steel-reboot.fandom.com/wiki/Tweezer_Ultralinks?oldid=28716"
Community content is available under CC-BY-SA unless otherwise noted.