Turbo Vehicle Modes are modes based off on vehicles used by C.Y.T.R.O.. With these modes, C.Y.T.R.O. can reconfigure his structure and fuse parts of vehicles or weapons into his body. He can only use these modes if his Connect-Tek suit is charged with enough T.U.R.B.O. Energy.

The following list contains all modes in order of appearance. 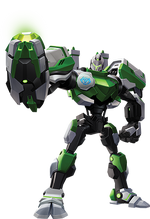 C.Y.T.R.O.'s default mode and the upgraded version of his previous version. Unlike other members of Team Turbo, this mode offers heavy weaponry to C.Y.T.R.O., such as a large cannon and a missile launcher in the back. It debuted in Team Turbo. 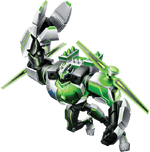 C.Y.T.R.O.'s first Turbo Mode unlocked in Team Turbo. C.Y.T.R.O. gets propellers on his shoulders, a missile launcher on his back and a cannon on his right hand.

C.Y.T.R.O.'s second Turbo Mode unlocked in Team Turbo Fusion-Tek. This mode was created by Professor Mortum in order to reach C.Y.T.R.O.'s maximum power to hunt down Max Steel. C.Y.T.R.O. gets the ability of flight and a giant wrecking ball on his right arm.

Retrieved from "https://max-steel-reboot.fandom.com/wiki/Turbo_Vehicle_Modes?oldid=27844"
Community content is available under CC-BY-SA unless otherwise noted.