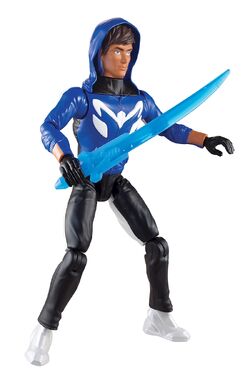 Turbo Transformation Max is an action figure based on Max Steel. It was released on 2016 on the first wave of action figures.

Max's attire is based on the same that he used when he was a teenager. He uses a blue jacket which has a white symbol of Steel, with a hood that covers Max's head, black gloves, black jeans, and white shoes. The figure also preserves some aspects of the Transform-Tek line, as seen with the hands. Max has twelve points of articulation, and comes with one accessory.

He comes with a transparent Turbo Sword. The main gimmick consists in changing Max's appearance to his Turbo Base Mode in a similar way as the Transform-Tek toys used to be transformed.

Retrieved from "https://max-steel-reboot.fandom.com/wiki/Turbo_Transformation_Max_Steel?oldid=29859"
Community content is available under CC-BY-SA unless otherwise noted.