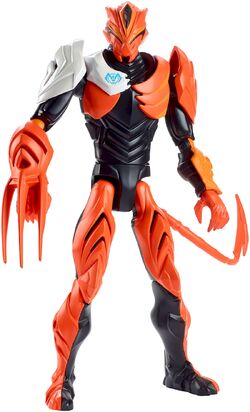 Turbo Tiger La Fiera is an action figure based on the character with same name using Turbo Tiger Mode. It was released on 2016 on the first wave of action figures and is a part of Connect-Tek line and Max Steel: Team Turbo.

La Fiera have a orange helmet that resembles a tiger in terms of shape, like his animation counterpart. The helmet has black details on the center and below the eyes, which are yellow. He has the Team Turbo logo on the left side of the chest, featured by a white part. While the rest of La Fiera's body is made on black and darker and lighter tones of orange, he has black marks on his thighs, which resembles the marks of a tiger, making a reference to the name of the toy. He has twelve points of articulation, and comes with four accessories.

La Fiera comes with two shoulder pads, one being white and other being orange, a orange claw, and a tail which can be attached to his back. Like other toys of Connect-Tek, La Fiera can hold other weapons from other toys on the Connect-Tek ports on his shoulders, forearms, legs and back.

Retrieved from "https://max-steel-reboot.fandom.com/wiki/Turbo_Tiger_La_Fiera?oldid=26060"
Community content is available under CC-BY-SA unless otherwise noted.