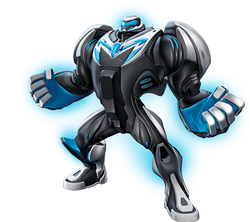 Turbo Strength Mode, aka Protocol X795, is Maxwell McGrath and Steel's second Turbo mode, this mode allows Max the power of super strength in which he can easily lift cars, and can fight considerably powerful opponents. It is also approximately three times bigger than Base Mode, and can throw Turbo punches. It first appeared in Come Together Part One.

The mode was created for combat against Fire Elementor, when Max and Steel were attacked in Copper Canyon.

After Max and his team invades an abandoned warehouse and realize that someone had set a trap for them, Max sees few energy cubes emerging from the walls and ground and activates Turbo Strength Mode in order to destroy them. The cube slowly drains Max's energy until he faints and turns back to his Turbo Base Mode.

When Max transforms into Turbo Strength Mode, he becomes bigger, stronger, and more armored than other modes, with enough strength to easily lift a semi-truck or destroy a building with a single blow. Max’s strength is increased exponentially, only limited by the amount of Turbo Energy he generates. His size is also dramatically increased, growing as his strength does![1]

Retrieved from "https://max-steel-reboot.fandom.com/wiki/Turbo_Strength_Mode?oldid=28327"
Community content is available under CC-BY-SA unless otherwise noted.