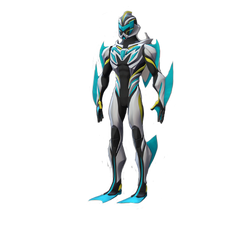 Turbo Scuba Mode is Maxwell McGrath and Steel's fifth Turbo Mode. It allows the user to adapt to any aquatic enviroment. It first appeared in Hard Water.

Max and Steel were looking for clues of the abductions of people, but they had to go underwater. Steel decides to create Turbo Scuba Mode to explore the ocean.

The mode made a brief appearance while Max and Steel combined it with Turbo Heat Mode to create Turbo Hydro Heat Mode to face Toxzon.

Max Steel's face now looks kind of like a knight, and his body is skinny and tall. He has muscular arms, with a six pack. He has yellow, green and blue stripes on his suit, and it's black and white. He also has fins and it looks like he has a fin arms, and legs.

Retrieved from "https://max-steel-reboot.fandom.com/wiki/Turbo_Scuba_Mode?oldid=30907"
Community content is available under CC-BY-SA unless otherwise noted.