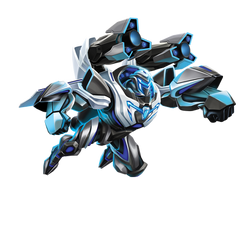 Turbo Rocket Mode is Maxwell McGrath and Steel's tenth Turbo Mode. After the Turbo Nova Mode, this is one of most powerful modes in Max Steel's arsenal, Max and Steel can reconfigure their SteelSuit into Turbo Rocket, which allows them to blast off into high orbital flight. It first appeared in Makino Strikes: Part Two.

During the battle against Makino, Max told Steel a code that Molly previously said to him. The code unlocked a pre-recorded message from his father, more memory files, and especially, the Turbo Rocket Mode, that easily defeated Makino.

Retrieved from "https://max-steel-reboot.fandom.com/wiki/Turbo_Rocket_Mode?oldid=30476"
Community content is available under CC-BY-SA unless otherwise noted.