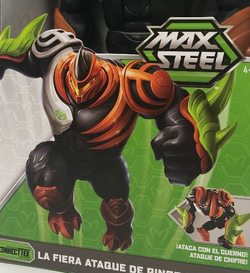 Compared to other of La Fiera's modes, Turbo Rhino is much larger and bulkier. La Fiera has a orange helmet with a pair of dark grey horns and a T-shaped visor. He has circular orange rips around his neck, a white chest piece with Team Turbo's green logo, three rips on the left side of his chest with small yellow lozenges. His right shoulder has a white shoulder pad while his left shoulder features a orange pad, and he wears green forearm pads with a pair of spikes protuding from them on both arms from them and possesses large hands. He also has black black thigh pads and orange boots with three toes similar to that of an actual rhino.

Retrieved from "https://max-steel-reboot.fandom.com/wiki/Turbo_Rhino_Mode?oldid=29482"
Community content is available under CC-BY-SA unless otherwise noted.