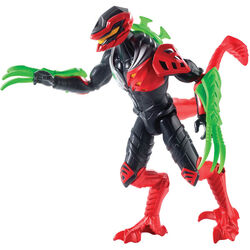 La Fiera Turbo Raptor is one of La Fiera's action figures released in the first half of 2017. He is a part of both Turbo-Charged and Connect-Tek sublines.

La Fiera wears a helmet with the shape of a head of a velociraptor featuring black and red details and a yellow thin visor where the mouth was supposed to be. He has a white piece attached to the right part of his chest and shoulder which features Team Turbo's green logo, a red piece attached to his left chest featuring yellow lozenges. He also wears a white and red shoulder pad featuring three rips on them. La Fiera also has red forearm pads, knee pads featuring two rips and a lozenge and red boots featuring curved claws in the feet similar to a velociraptor. La Fiera comes with three accessories and has thirteen points of articulation.

He comes with a pair of fore arm pads featuring three curved, long claws and a spine with three spikes that La Fiera can hold with his hands.

Preview of the toy shown in Comic-Con Experience, Brazil
Add a photo to this gallery

Retrieved from "https://max-steel-reboot.fandom.com/wiki/Turbo_Raptor_La_Fiera?oldid=32747"
Community content is available under CC-BY-SA unless otherwise noted.