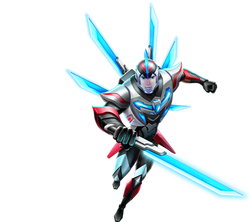 After Max and his friends were surrounded by the Elementors, Toxzon and Extroyer, Max decides to go Turbo and creates Turbo Prime Mode, which is extremely powerful, as Steel points out. Max uses his Connect-Tek Sword to charge his friends with T.U.R.B.O. Energy and they go Turbo. Afterwards, Max fights against Toxzon, while La Fiera deals with Extroyer and Tempestra and C.Y.T.R.O. take care of Firestorm Elementor.

After being hit by few Goopanoids projectiles, Max uses his sword to launch a T.U.R.B.O. Energy projectile on Toxzon's arm launcher, which results in a explosion. Eventually, the Elementors fuse themselves to create Mega-Elementor and Max points out that they should combine their powers in order to take the villains down. After doing so, Team Turbo commemorates their victory until Mortum suddenly appears and steal the Connect-Tek, but luckily Max had put a piece of his Connect-Tek sword on the chamber of the device, which they use to track down the villain.

When they invade his hideout, Max commands to free N-Tek and hand over the Connect-Tek, but Mortum refuses and releases bombs that attach to the chests of Jim, Kat and Molly. Max tries to take him down but he fails thanks to a shield protecting the captives. Steel luckily finds the shield generators and Max commands his team to destroy them. After doing so, Max uses his swords to slash the bombs and save the day.

When a group of thieves were robbing a bank, Max and his team activated their Turbo Modes and Max transformed into Turbo Prime Mode. The thieves use their guns but Max appears and uses his sword to slash their weapons. However, two more thieves comes and they manage to escape. The rest of Max's team split up to capture the thieves and Max goes after their vehicle that was about to crash and explode and harm people. He quickly flies and incrust his sword on the ground and concentrates his T.U.R.B.O. Energy, creating a shield that reduces the damage. After the other members of Team Turbo managed to stop the other thieves, one of them knock down a police officer and says to everyone back off, but Max drops a heavy bag of gold bars that they were robbing.

There, they arrive just in time when the villain was about to consume the brain of his own nephew. Max's team successfully managed to destroy Mortum and the villain's nephew tell them about his past. Shortly after he ended, Mortum reunited himself and transformed into Turbo Trap Mode. Upon seeing Alex, Rayne and C.Y.T.R.O. defeated, Max uses his sword to release a large wave of T.U.R.B.O. Energy that destroyed some of Mortum's arms. Unfortunately, the villain recretes these arms and eventually defeats Max, also making him deactivate his Turbo Prime Mode in the process. Steel later on manages to finish the brain shields and use them in Max's friends, but he is later captured by Mortum. Much later, Max finally links with Steel again and uses his Turbo Prime Mode to go to Mortum's temple while he was absorbing large amounts of brain energy. Max uses his sword to project T.U.R.B.O. Energy projectiles that destroy Mortum. The villain simply uses his regeneration abilities to transform into his most powerful form yet: Turbo Scorpion Mode. Upon seeing that mode, Max uses the blades on his back to project T.U.R.B.O. Energy projectiles, which hit Mortum's brain bank locted in his abdomen. Steel ratiocinated that if Mortum's brain bank was hit with full power, Mortum would permanently lose his powers. Max and his team confidently approached Mortum and attacked him, but he defeated them with ease. Rayne eventually realises that their mental link that they obtained hours ago could be used to share their powers. After each member of the team shared their abilities, Max transformed into Turbo Mega Mode.

Alongside with Team Turbo, Max invades an abandoned warehouse hoping to find hostages. However, it turns out that it was a trap set by someone. Upon realizing it, Max deactivates Turbo Prime Mode and activates Turbo Strength Mode and attempts to stop various energy cubes that were emerging from the ground.

Retrieved from "https://max-steel-reboot.fandom.com/wiki/Turbo_Prime_Mode?oldid=28332"
Community content is available under CC-BY-SA unless otherwise noted.