Turbo Modes are techno-organic suits and transformations used by Maxwell McGrath and Steel to gain advantages over their enemies and new powers such as flight, superspeed and invisibility. They can be only accessed if Max has enough T.U.R.B.O. Energy to activate them. Most of Max's modes doesn't requires too much T.U.R.B.O. Energy, contrary to the new modes that he unlocked in the second season. The first Turbo Mode ever seen was Turbo Base Mode, unlocked in Come Together Part One.

During the events of Turbo-Charged, Max is separated from Steel by Terrorax, a mysterious villain who wants to exploit the true potential of Max's T.U.R.B.O. Energy, and now Max's Turbo Modes are completely technologic rather than techno-organic. Max's first Turbo Mode was Turbo Armor Mode. Max also mimicks some of his old modes with his new gear, the Steel-Tek. An example is his power gloves, based on Turbo Strength.

When Max overloaded the Turbo Chamber, Steel links with Max and they formed Turbo Base Mode, their very first form.

Here is a list of the following Turbo Modes Max Steel have used in the series. (Note that they are in order of appearance). 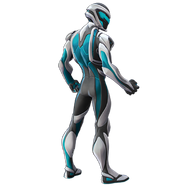 Turbo Base Mode, also known as Steel-Suit, is Max and Steel's first form created when Steel first linked with Max. It gives Max enhanced strength and durability and can never be taken off. Due to safety issues, Steel changes its looks to make it seem like ordinary attire. It debuted in Come Together Part One. 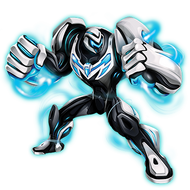 Approximately three times as big as Base Mode, and packing a punch, this Turbo Mode is a heavy-hitter. Turbo Strength mode takes on the heavy-hitter jobs, whether it's dealing with Dredd, or beating Ultimate Elementor. It debuted in Come Together Part One. 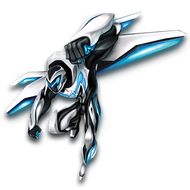 Making it's debut in Come Together Part Two, Turbo Flight Mode allows Max, and Steel, to fly through the sky using T.U.R.B.O Energy. It is also powerful enough to send Max and Steel into space. 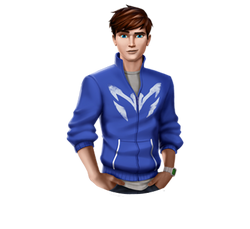 Camouflage Mode is a mode created solely to hide Maxwell's secret identity. Usually, Max wears a blue jacket with the Steel logo on the front, a watch on the right arm, dark blue jeans and white shoes. In the second season, the color of the jacket changes to grey. It debuted in Come Together Part Two. 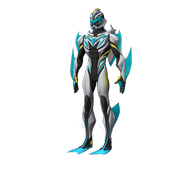 Created in Hard Water, Turbo Scuba Mode was used to fight Water Elementor, and to search for Toxzon at the end of Gone Fishin', along with several other instances when it came in handy. It has flippers for feet, and a slick, more aerodynamic form to swim faster in the water. 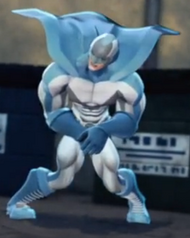 Turbo Super Mode is a transformation based oon the comicbooks that Steel was obssessed over, hence the cape and its look. By saying specific phrases, the mode activates powers similar to those of a Superhero, such as laser vision and others. This mode debuted in Supermania, but it was officialy named in The Ultralink Hunter. 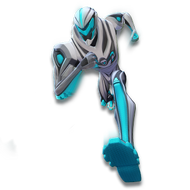 Since Max and Steel didn't had a quick Turbo Mode to fight against villains, Steel creates Turbo Speed Mode, Max's fastest Turbo Mode. It allows him to have supersonic speeds, making him faster than any villain. It minimizes delay and maximizes intervention time, but requires vast amounts of T.U.R.B.O. Energy. It debuted in Elements of Surprise Part Two. 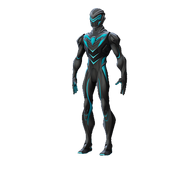 Turbo Stealth Mode is a mode that makes Max invisible wherever he goes. He gets shock absorbers on the solo of the foot, thus making Max virtually unable to be noticed by villains. This mode is usually used to recover archives of interest to N-Tek and infiltration. It debuts in Scrambled. 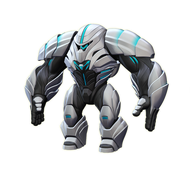 Turbo Cannon Mode is a large and sturdy mode quite similar to Turbo Strength Mode. When charged with T.U.R.B.O. Energy, Max can launch himself at enemies, doing extremely heavy damages. Its armor is also extremely durable and is Max's favorite modes. It debuted in Split Decisions. 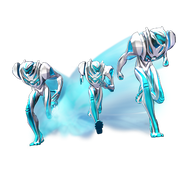 Turbo Clone Mode is a mode that is able to replicate himself. The mode is very similar to the mode that Max has copied, but the only difference is the additional blue tint on the armor. This mode requires lots of T.U.R.B.O. Energy and extreme concentration to control it, or otherwise, the clones will disappear. This mode debuted in Pick Your Poison, used to fight against Toxzon and a hypnotized Ultimate Elementor. 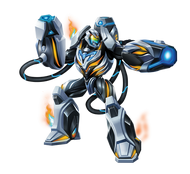 Created in Hot Zone, Turbo Heat Mode is a bulky, large mode capable of converting Max's T.U.R.B.O. Energy into scorching fire. Although that it is extremely powerful, it costs a lot of energy and Max needs concentration in order to operate it, or otherwise, he will lose control and return to his Base Mode. 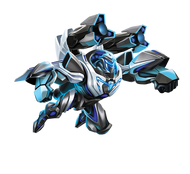 One of Max's most powerful modes, this mode was used for the first time on Makino Strikes Part Two to defeat Makino. Steel reconfigures the Steel-Suit to a improved and more powerful version upgraded with two cannons capable of burst T.U.R.B.O. Energy blasts. This mode requires vasts amounts of energy however. 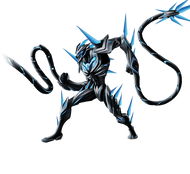 With Turbo Spike Mode, Max obtains a pair of black, long whips with spikes on its ends, which Max can use to climb walls. It is one of Max's leanest and meanest modes on Max's arsenal and although it is very powerful, Max gets susceptible to attacks, as he loses a good part of his defensive properties.

When Max Steel activates Turbo Nova Mode, he is armed with three T.U.R.B.O. Energy cannons capable of defeating his enemies with a single shot. Its armor is highly durable, as it was created to explore the space and Max also gets much faster. It debuted in The Wrath of Makino in a competition to become the new commander of the Ultralinks.

This transformation was created by Makino in order to accomplish his mission to destroy Earth by tearing it in half. This mode was gigantic and had two kinds of armors for Max and Jim. Makino uses his energy and Max's T.U.R.B.O. Energy to power this mode. It only appeared in The Wrath of Makino.

The Turbo Titan Mode is a mode created to match Makino's Turbo Annihilation Mode. Max is equipped with a pair of floating blades on his back and due to its size, Max's strength is enhanced. It requires a lot of T.U.R.B.O. Energy to operate it. It debuted in The Wrath of Makino.

With Turbo Combo Mode, Max is able to combine each mode in his arsenal, to create fusions even powerful than before. The first combination done was Turbo Spike Mode between Turbo Cannon Mode, in the movie, Max Steel: The Dawn of Morphos, which marked the debut of this mode.

Stated to be Max Steel's strongest Mode, it is the upgraded version of his Turbo Strength Mode. Max gains an exo armor made out of T.U.R.B.O. Energy and gets much stronger, faster and more durable. Due to the fact that it requires lots of T.U.R.B.O. Energy, it was solely used in Maximum Morphos solely to defeat Morphos.

The mode was especially designed to extreme environments that normally Max's other modes wouldn't resist. The mode is recommended to rescue missions, since Max and Steel could never know when their enemies are hiding in the dark. The official website also states that it is an "experimental new mode". It debuted in Team Turbo.

This mode is equipped with turbo-charged blades on Max's back that gives him the power of flight. Additionally, Max counts with the Connect-Tek Sword, which originally belonged to his father. It debuted in Team Turbo.

Not technically a Turbo Mode, Steel designed it after he completed the brain shields in Team Turbo Fusion Tek. Max is not equipped with any kind of weapon on this mode, but he later finds a pair of daggers which he used to fight against Professor Mortum.

This mode has increased stealthiness and comes with a blaster. It debuted in Team Turbo Fusion Tek and it was only used to bring back the brainwashed members of Team Turbo.

This mode is the fusion of Team Turbo's second Turbo Modes. It has La Fiera's claws, C.Y.T.R.O.'s wrecking ball and Tempestra's ice javelins. It debuted on Team Turbo Fusion Tek and it was only used to defeat Mortum's Turbo Scorpion Mode. 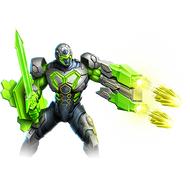 Max's first completely technologic mode. The mode is equiped with heavy weaponry, such as double blasters and a large sword, and a heavy, resistant armor. It debuted in Turbo-Charged and was used to defeat Terrorax.

In Ultralink Hunter, Steel unlocked Turbo Mimic Mode, a Turbo Mode that is only useable by Steel. This mode allows Steel to create his own versions of Max's Turbo Modes, at the cost of more T.U.R.B.O. Energy. However, by overusing this mode makes Max and Steel unable to change modes. So far, Steel has only mimicked Turbo Super Mode, Turbo Cannon Mode and Turbo Strength Mode.