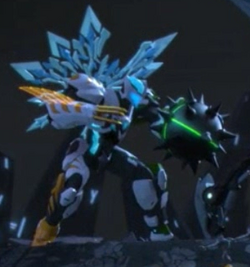 After Rayne, Alex and C.Y.T.R.O. realised that they still had the mental link, they gave their powers to Max defeat Mortum. Shortly after, Max started to glow and his powers went off the chart, and he transformed into Turbo Mega Mode. Mortum stayed surprised and asked what was that, and Max stated that that was what Team Turbo was all about, shortly after attacking Mortum with C.Y.T.R.O.'s wrecking ball and disorientating him. Mortum strikes back but Max flies and launches Tempestra's ice projectiles, freezing his claws and later uses La Fiera tallons that destroys one of his claws and ultimately knocks him down with C.Y.T.R.O.'s wrecking ball. Mortum tries to desesperately win the battle by launching a powerful energy beam. Max generates his Connect-Tek sword and slowly gets closer to Mortum, at the same time saying that he stole that power and he was nothing without that. Ultimately, Max manages to stop the energy beam and impales his sword on his torso, making the Connect-Tek and his brain bank be exposed. He launches a powerful T.U.R.B.O. Energy wave through his sword that destroys the Connect-Tek and the brain bank in the process, giving back the humans' brainwaves and possibly fatally harming Mortum. After the villain was defeated, Max transformed back to his normal attire.

Retrieved from "https://max-steel-reboot.fandom.com/wiki/Turbo_Mega_Mode?oldid=29088"
Community content is available under CC-BY-SA unless otherwise noted.