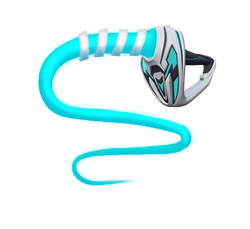 Turbo Lash is one of Max Steel's turbofied weapons that was invented by Berto. It first appeared on Ultralink Invasion Part One.

When Max and Steel were training, a Makino Destroyer appeared and released a energy lash that captured them. Since Max could barely free himself, Berto created a "rip-off" of that lash, naming it Turbo Lash.

When Max was losing the battle against the trio of Ultralinks, C.Y.T.R.O. appeared and released the Turbo Lash. After activating it, Max used it to knock down Prism Link and throw Chomp Link and finally defeat Blast Link.

The handle concentrate large quantities of T.U.R.B.O. Energy similar to a weapon with a whip. When Steel links with the handle, a long and resistant whip will emerge. The more Max generates T.U.R.B.O. Energy, the large the whip will get.

It can also electrocute foes as shown in Fugitives, when Max Steel attacked Ragnok with the Turbo Lash.

Retrieved from "https://max-steel-reboot.fandom.com/wiki/Turbo_Lash?oldid=24838"
Community content is available under CC-BY-SA unless otherwise noted.