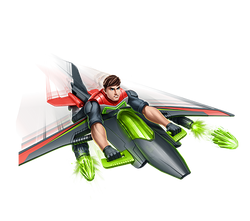 Max appears using this mode for a short period of time to do few maneuvers before activating Turbo Wave Rider Mode.

Max wears a black, red and silver suit with a logo on the chest with the shape of the letter M. He gets a vehicle similar to a jet which he can mount on. The vehicle features the same colors as his armor and has missile launchers on its wings.

Retrieved from "https://max-steel-reboot.fandom.com/wiki/Turbo_Jet_Pack_Mode?oldid=28839"
Community content is available under CC-BY-SA unless otherwise noted.