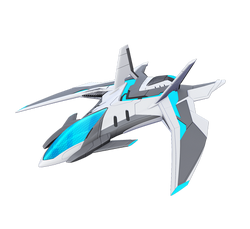 Turbo Jet is a vehicle built by Berto to help Max Steel. It first appeared in Turbo Deep Star Sea.

It was created by Berto and Steel. Alongside with it, he created T.J., which is the computerized intelligence of Turbo Jet, to help the user handle it.

The Turbo Jet is a very fast vehicle (able to reach 10,000 miles per hour), that has a sleek, stealthy and an aerodynamic design that allows for quick acceleration and maneuverability. It has some special abilities too, namely the Turbo Slide, consisting of two blades that appear on the sides of the Turbo Jet allowing for a unique air/melee attack approach, Turbo Pulse cannons, and two modes, the aerial mode (or base mode), and aqua mode, the latter of which allows for aquatic travel.

Retrieved from "https://max-steel-reboot.fandom.com/wiki/Turbo_Jet?oldid=24206"
Community content is available under CC-BY-SA unless otherwise noted.