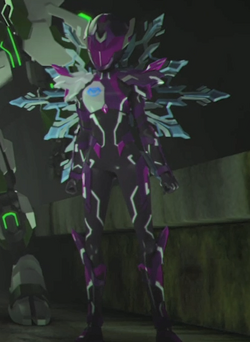 After Team Turbo are brainwashed by Professor Mortum, new Turbo Modes are created to them to make them reach their maximum potential in order to hunt down Maxwell and Steel. Tempestra found Max and Steel while they were talking and attempted to kill them. Eventually, Max managed to escape from her.

Later on, Max goes to the sewers and is found by Team Turbo. They once again attempt to destroy Max, but he manages to escape and transforms into Turbo Hunter Mode, which he uses to cure Team Turbo. Tempestra was the third and last member to be cured and was the hardest to defeat. However, once she regained her conscience, she helped Max in destroy Mortum alongside with C.Y.T.R.O. and La Fiera.

Afterwards, Tempestra, La Fiera and C.Y.T.R.O. fight against a large horde of zombies. Meanwhile, Tempestra remembers about their mental link, obtained when Max cured them in the sewers. She shares her powers alongside with the rest of the team and Max gains access to Turbo Mega Mode, which has Tempestra's wings, La Fiera's claws and C.Y.T.R.O.'s wrecking ball. He easily defeats Mortum and puts an end to the Technopocalypse.

Tempestra uses Turbo Ice Storm Mode to invade an abandoned warehouse where hostages were being held. However, it turns out to be a trap set by Terrorax. The team is surrounded by energy cubes that absorb their T.U.R.B.O. Energy and make them return to their base mode.

Much later, Tempestra activates Turbo Ice Storm Mode on the Halifax Industries Building while stealing information from Dr. Prometheus Halifax. Eventually, C.Y.T.R.O. and Tempestra are forced to retreat and they find Max and La Fiera, who were about to be killed by Terrorax. The villain easily defeats her by grabbing her and squeezing her until she turns back to her base mode.

Later on, Tempestra uses Turbo Ice Storm Mode to defeat Monstro, but before she could, C.Y.T.R.O. had buried the creature alive with his Turbo Drill Mode. Shortly after his defeat, Tempestra and C.Y.T.R.O. leaves the desert.

Team Turbo invades Terrorax's Hideout and Tempestra activates Turbo Ice Storm Mode in order to fight against Team Terror. She fights against Snare and his traps, but she is trapped in the wall with a energy net. The robot launches a saw on her direction to kill her, but she freezes the saw and sends back to him and it hits his shoulder. She releases herself from the energy net and releases a fog in order to help Max to defeat Monstro.

Retrieved from "https://max-steel-reboot.fandom.com/wiki/Turbo_Ice_Storm_Mode?oldid=28416"
Community content is available under CC-BY-SA unless otherwise noted.