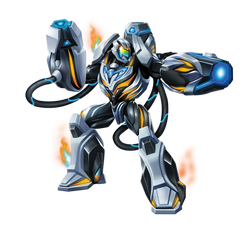 Turbo Heat Mode is Maxwell McGrath and Steel's ninth Turbo Mode. With this mode, Max Steel can transform his T.U.R.B.O Energy into scorching fire, literally turning up the heat on his enemies. It first appeared in Hot Zone.

While Max and his friends were in a vacation in an island, Steel remembered a new Turbo Mode. When Mega Elementor attacked the island, Steel unlocked this mode, although that Max didn't use it well.

Retrieved from "https://max-steel-reboot.fandom.com/wiki/Turbo_Heat_Mode?oldid=30475"
Community content is available under CC-BY-SA unless otherwise noted.