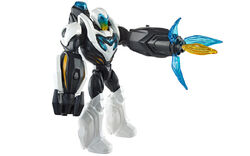 Turbo Heat Max is an action figure based on Max Steel in the Turbo Heat Mode. It was released in 2014 in the second wave of action figures, and is a part of Land Invasion line.

The figure, based on Turbo Heat Mode, have mostly black and white in the armor, with yellow and blue details. The figure have eight points of articulation and comes with four projectiles.

Retrieved from "https://max-steel-reboot.fandom.com/wiki/Turbo_Heat_Max?oldid=30360"
Community content is available under CC-BY-SA unless otherwise noted.