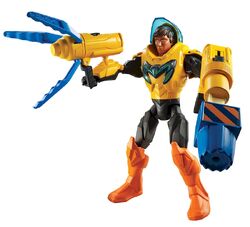 Max Steel's face is completely shown on this mode, and has older features. He wears a large armor featured by black and yellow with few orange parts. Max has twelve points of articulation, and comes with two accessories.

He comes with a yellow weapon that has three blue claws, which can open and close through a blue button. He has a weapon with a lever that can launch a large blue projectile. Max's blue transparent helmet can also be removed to show his face.

Retrieved from "https://max-steel-reboot.fandom.com/wiki/Turbo_Hammer_Claw_Max?oldid=24822"
Community content is available under CC-BY-SA unless otherwise noted.