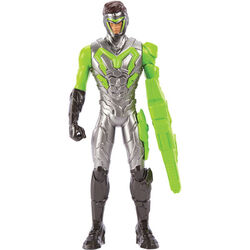 Turbo Gun Max Steel is an action figure based on the character with the same name. It was released in the first half of 2017 and is a part of Turbo-Charged.

"Can Max and Team Turbo rise to the next level and defeat the dark energy of evil Terrorax? Inspired by the new animated movie Turbo-Charged this collectible 6” action figure lets fans play out Max’s new Turbo Gun Mode. The figure features a new logo and enhanced power suit plus 5 points of articulation for epic action and posing. Max’s hands can grip accessories and he wields a Turbo Gun! Experience the ultimate new modes with this and the other assortment figures like Turbo Sword Max and Turbo Punch Max Steel, or choose the spike-wielding Terrorax and recreate all of the extreme battle adventures!"

Max uses a silver mask that covers the sides of his head, eyes, nose and chin. The mask also has a green visor. He has a silver armor with a green logo with the shape of the letter M, green lines in the upper torso a green thigh pad in the left thigh and black boots. Max's right arm has black forearm pads and his left arm has a large green cannon.

Retrieved from "https://max-steel-reboot.fandom.com/wiki/Turbo_Gun_Max_Steel?oldid=29746"
Community content is available under CC-BY-SA unless otherwise noted.