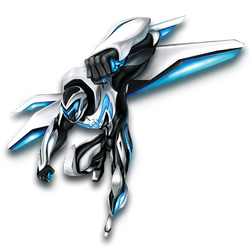 Turbo Flight Mode is Maxwell McGrath and Steel's third Turbo Mode. Despite being very basic, it allows Max Steel to fly through the skies or even on space. It first appeared in Come Together Part Two.

During one of N-Tek's training sessions, Berto sends out few C.Y.T.R.O. prototypes to fight against Max and Steel to test their abilities. In the process, Max is tossed on the sky and falling until Steel creates a new Turbo Mode that allowed him to fly. Shortly after, Max unlinks Steel from his chest and releases a T.U.R.B.O. Energy ray that destroy all the robots.

When Earth and Fire Elementor were attacking Copper Canyon, Max linked with Steel and activated Turbo Flight Mode and used it for some seconds before activating Turbo Strength Mode.

The Dawn of Morphos

Retrieved from "https://max-steel-reboot.fandom.com/wiki/Turbo_Flight_Mode?oldid=30802"
Community content is available under CC-BY-SA unless otherwise noted.