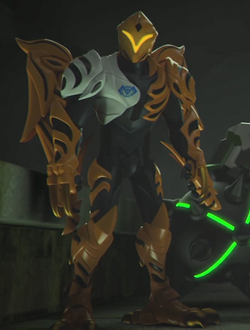 Alongside with Turbo Wrecking Ball Mode and Turbo Ice Storm Mode, Turbo Eagle was created by Professor Mortum in order to capture Max and Steel. La Fiera's armor was completely remade to be more powerful than the other modes.

After Max managed to escape from Mortum's hands, La Fiera started to hunt him alongside with Tempestra and C.Y.T.R.O. since he was under Mortum's control. He followed Max to the sewers alongside with the others and tried to eliminate him, but eventually Max activated his Turbo Hunter Mode and launched a receiver on their heads that made them broke free from Mortum's control and return to their normal selves. Shortly after Alex returned to his old self, he stated that the whole world was screaming Mortum on his head. The team still had the powers that Mortum gave them and a mental link was created after the receivers were implanted on their heads.

La Fiera, alongside with Max, C.Y.T.R.O. and Tempestra went to Mortum's new base and he used his claws to attack Mortum and tear his arms off. Eventually, Mortum's Turbo Trap Mode was destroyed but he recreated himself and transformed into Turbo Scorpion Mode.

In an attempt of defeat Terrorax, Alex activated Turbo Eagle Mode and attacks the villain, but he is trapped in the wall instead thanks to purple spikes that got stuck on his wings and generated a electricity field on him. He was later defeated and fell in the floor without his wings.

Alex later on activates Turbo Eagle Mode once again after defeating Snare in the desert.

Retrieved from "https://max-steel-reboot.fandom.com/wiki/Turbo_Eagle_Mode?oldid=28330"
Community content is available under CC-BY-SA unless otherwise noted.