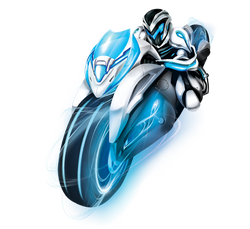 Turbo Cycle (or Turbofied Cycle) is one of few vehicles created by Berto to help Max Steel. It first appeared in C.Y.T.R.O Attacks!.

When C.Y.T.R.O. was being controlled by Toxzon, Berto presented to Max & Steel the Turbo Cycle, that was going to be very usefull in many situations.

To activate the vehicle, Steel links with it, allowing Max to use his T.U.R.B.O Energy to enhance it, as well, being the fuel of the Turbo Cycle. It also able to reach 500+ mph.

Retrieved from "https://max-steel-reboot.fandom.com/wiki/Turbo_Cycle?oldid=22095"
Community content is available under CC-BY-SA unless otherwise noted.