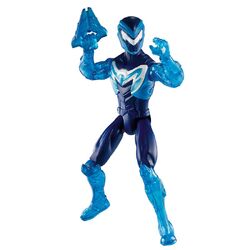 Turbo Charged Max Steel is an action figure based on the character with same name. It was released in 2016, introduced in the second wave of action figures and is a part of Connect-Tek and Team Turbo Fusion-Tek toy lines.

Max's armor is completely blue and have transparent parts. His helmet is dark blue and he has a white visor. Steel is connected to Max's chest, having a white border around him and blue paint in his upper torso. His arms are completely transparent and he holds a device with the shape of the letter V. The rest of his body is completely dark blue.

He comes with a weapon molded on his hand, but he still can hold many other weapons of the Connect-Tek toy line.

Add a photo to this gallery
Retrieved from "https://max-steel-reboot.fandom.com/wiki/Turbo_Charged_Max_Steel_(2016)?oldid=26878"
Community content is available under CC-BY-SA unless otherwise noted.