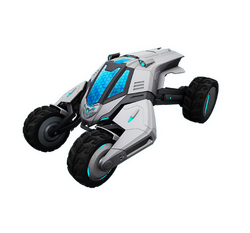 The Turbo Car is a vehicle that belongs to Maxwell McGrath. It was once an old, beat-up truck that belonged to Vin and Dwayne, but later on Max bought it in the Pre-Owned Car Lot. It first appeared in Driven.

The vehicle, originally an old truck, was used to escape from the cops by Vin and Dwayne, as they had stolen a case containing animal DNA samples. They left it on a pre-owned car lot thinking that it was a parking lot.

In the next day, Kirby helps Max in which car he was going to buy, and he ends up buying the truck. Because of his Turbo touch problem, he seriously damaged the car and later on asked Berto to fix it. The scientist turned it into the Turbo Car, armed with missile launchers, advanced N-Tek communication system and a Stealth Mode, similar to Max Steel's.

When Steel links with the truck, it turns into the Turbo Car, fueled by Max's T.U.R.B.O. Energy. The vehicle is perfect for rally cross and off-road due to its shock jumping mechanism and extraordinary brakes system. The car is also really fast, and the more energy Max generates, the faster it goes.

Retrieved from "https://max-steel-reboot.fandom.com/wiki/Turbo_Car?oldid=27869"
Community content is available under CC-BY-SA unless otherwise noted.