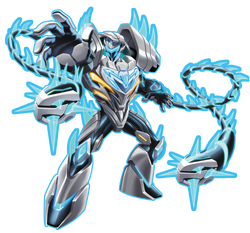 Turbo Cannon Spike Mode is the first fusion Turbo Mode created by Max and Steel and their fifteenth Turbo Mode. It debuted in Dawn of Morphos.

In a brutal fight against Morphos, Max and Steel are almost being defeated by him, until they combine Turbo Cannon Mode and Turbo Spike Mode. As result, Morphos is unable to copy their brand new Turbo Mode and the duo use their powers to take down the villain and save the day.

Retrieved from "https://max-steel-reboot.fandom.com/wiki/Turbo_Cannon_Spike_Mode?oldid=28963"
Community content is available under CC-BY-SA unless otherwise noted.