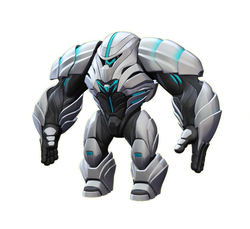 Turbo Cannon Mode is Maxwell McGrath and Steel's seventh Turbo Mode. This mode is very large and sturdy, which can be charged with T.U.R.B.O Energy to launch itself at enemies, doing extremely heavy damage. It first appeared in Split Decisions.

When Max, Steel, and other N-Tek agents were trying to escape from the Elementors, they were eventually cornered. Berto continuously started to say to Max and Steel use a new mode named "Turbo Cannon Mode". Despite Max and Steel's distrust, the mode actually worked very well and easily defeated the Elementors.

After Steel gained Dread's trust, he activated Turbo Cannon Mode, charged Max with T.U.R.B.O. Energy and launched itself on Dread, defeating him, plus making the Makino Destroyer explode due to the negative charge of his energy.

After Max was knocked down by the energy lash of the Makino Destroyer, he transformed into Turbo Cannon Mode and replicated himself with Turbo Clone Mode, creating various clones that completely destroyed the ship. It is worth note that through training Max managed to improve the abilities of Turbo Cannon Mode.

Later on, Max tried to use this mode against Blast Link moments before he was charging to attack, but failed afterwards.

When the Destroyers were attacking N-Tek's base, Max transformed into Turbo Cannon Mode and shortly after into Turbo Clone, clonining himself and destroying the shield around the ship and later the ship itself.

Retrieved from "https://max-steel-reboot.fandom.com/wiki/Turbo_Cannon_Mode?oldid=26704"
Community content is available under CC-BY-SA unless otherwise noted.