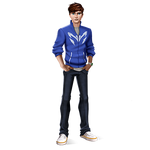 Turbo Camouflage Mode A.K.A Turbo Camo is one of Maxwell McGrath's exclusive Turbo Modes and the third mode of the duo. Unlike previous modes, this is solely used to protect his secret identity rather than offensive purposes. It first appeared in Come Together Part Two.

Ever since Maxwell McGrath and Steel linked to be Max Steel, the Turbo Modes that they have are permanently on Max. To protect his secret identity, Steel made the Turbo Camouflage Mode to blend in with humans and to save his alter-ego.

Max commonly uses grey shirt under a blue jacket with a white Steel logo on his chest, a white watch on his left wrist, black jeans and white shoes. Halfway through the second season, Max's jacket changes to grey.

In Team Turbo Fusion-Tek, Max appears using a white t-shirt with a blue stylized version of the Steel logo on his chest, grey jeans and black shoes.

Retrieved from "https://max-steel-reboot.fandom.com/wiki/Turbo_Camouflage_Mode?oldid=30905"
Community content is available under CC-BY-SA unless otherwise noted.