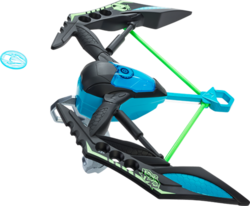 Turbo Bow Steel (unofficial name) is roleplay figure based on Steel. It was released the second wave of action figures in 2015 as a part of Battle-Tek line.

It is another action figure where Steel is shown to be a weapon. The figure is similiar to a arc mixed with a crossbow, and preserves some of Steel's original characteristics, like the blue parts. The figure has black arms and has green paint apps, one showing the series's logo, and the other showing N-Tek logo.

The figure is able to launch five dics, and also reproduce lights and battle sounds. According to the package, this figure is perfect to attack the mini-figure of Miles Dread that comes with another Steel toy.

Retrieved from "https://max-steel-reboot.fandom.com/wiki/Turbo_Bow_Steel?oldid=23790"
Community content is available under CC-BY-SA unless otherwise noted.