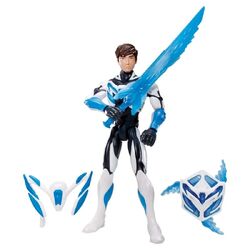 Turbo Battle Suit Max Steel is one of the character's action figures. It was released on the first half of 2013 and belonged to the Stealth toy line.

Max wears his signature Turbo Base Mode. He has white accents on the neck and his upper torso has a white armor with Steel connected to it. He wears white shoulderp ads, white biceps pads, blue forearm pads and black gloves. He has white armor on his thighs and wears white boots with blue accents. He has twelve points of articulation and comes with three accessories.

Max comes with a Turbo Sword which can figt on both of Max's hands, a shield that pop up three blades upon the Steel logo being pressed, and a Steel mini figure that can fit onto Max's right hand (which has a pull-back feature) to simulate the Turborang from the show.

Prototype.
Add a photo to this gallery

Retrieved from "https://max-steel-reboot.fandom.com/wiki/Turbo_Battle_Suit_Max_Steel?oldid=30183"
Community content is available under CC-BY-SA unless otherwise noted.