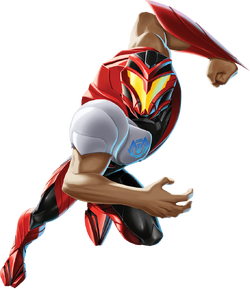 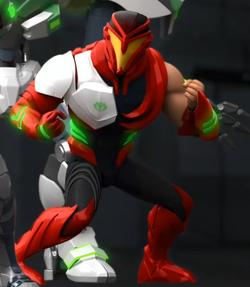 After La Fiera was knocked down by Earth Elementor, he transformed back to his base mode. While he was trying to get up, Water Elementor attacked him and he was knocked down again, but later woke up when Max Steel went after Toxzon, who had stolen the Connect-Tek for himself.

La Fiera appeared using this mode again after Max was rescued by C.Y.T.R.O. when he fell in the ocean. When Extroyer, Toxzon and The Elementors teamed-up to take down Max's team, La Fiera activated his Turbo Tiger Mode.

While the Thieves were robbing a bank, Max and his team appeared and La Fiera activated his Turbo Tiger Mode.

Later on, when Max saw a robot zombie, Alex activated his Turbo Tiger Mode, but eventually he was transformed back when a robot zombie tried to absorb his brainwaves.

After Max and his team went to Professor Mortum's hideout, Max and his team fought against Mortum. La Fiera tried to tear apart Mortum but eventually he was defeated and returned back to his base mode. Mortum started to consume his brainwaves until Steel created a brain shield that would prevent Mortum from absorbing the brainwaves from Alex, Rayne and Max. Shortly after seeing Steel's capabilities, he captured him and destroyed the base and escaped, and Max and the others went to a old farmhouse from the Martinez family.

There, after Max woke up, Alex tried to get signal on the radios and the TV but failed. After Rayne realized that they could be the only normal people left from Copper Canyon and Alex agreed, he was suddenly attacked by a zombie. He tried to activate his Turbo Tiger Mode but failed. Thanks to Steel's brain shield, his brainwaves weren't absorbed and the zombie was ultimately defeated.

La Fiera's helmet has red details around the yellow visor, which has the shape of the letter T and his helmet is mostly black, like his armor. He wears a sleveless armor that has three red details on his chest resmembling rips, a white piece on the right side of his chest with the logo of Team Turbo, a red, large streak on his right thigh and red boots. He also has red gauntlet in his left forearm.

Retrieved from "https://max-steel-reboot.fandom.com/wiki/Turbo_Base_Mode_(La_Fiera)?oldid=29458"
Community content is available under CC-BY-SA unless otherwise noted.