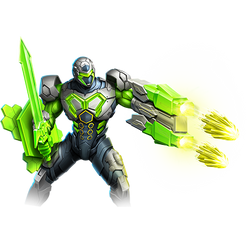 Turbo Armor Mode was forcibly created by Terrorax when Max was almost being finished off by him. After creating the mode, Max easily surpasses Terrorax and eventually defeats him by launching a T.U.R.B.O. Energy projectile to his chest, which almost kills him. After the villain was defeated, Max and his Team Turbo rescue the members of Team Terror and escape from Terrorax's hideout, which was about to blow up.

Afterwards, Max appears being carried by C.Y.T.R.O. with this mode and states that his new energy has limitless possibilities. Team Turbo celebrate their victory and later go back to their hideout.

Retrieved from "https://max-steel-reboot.fandom.com/wiki/Turbo_Armor_Mode?oldid=28894"
Community content is available under CC-BY-SA unless otherwise noted.