Turbo Animal Modes are modes based off on animals used by La Fiera on fights. With these modes, Alex can get stronger, faster, more durable or even fly. Alex can only use these modes if his Connect-Tek suit is charged with Max Steel's T.U.R.B.O. Energy. Like Tempestra and C.Y.T.R.O., his armor can be configured and reconfigured once again to transform into new forms.

The following list contains all modes in order of appearance. 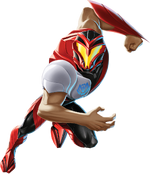 Alex's default Turbo Animal Mode. Like Max's Turbo Base Mode version, he doesn't gets any kind of special ability, but he is stronger than an average individual. It debuted in Team Turbo. 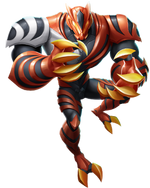 Alex's first Turbo Mode unlocked in the Team Turbo movie. With this mode, he gets as strong as Max Steel's Turbo Strength Mode, gets enhanced senses, being capable of hearing the smallest sound or detect the tiniest movement and has heightened stealth. According to the official website, the harder he fights, the stronger he becomes. 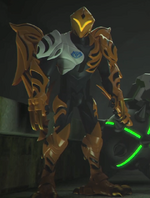 Alex's second Turbo Mode unlocked in Team Turbo Fusion-Tek. It was created by Professor Mortum in order to reach its maximum power to hunt down Max and Steel. Besides getting sharp claws that can slash through the enemies, Alex gets wings, being the first mode where he can fly.

Alex's third Turbo Mode unlocked in Turbo Charged. It was created to fight against one of Terrorax's minions, Snare, an assassin robot. In this mode, Alex gets much faster and more agile than other of his modes and obtains sharp claws for hands.

Retrieved from "https://max-steel-reboot.fandom.com/wiki/Turbo_Animal_Modes?oldid=28954"
Community content is available under CC-BY-SA unless otherwise noted.