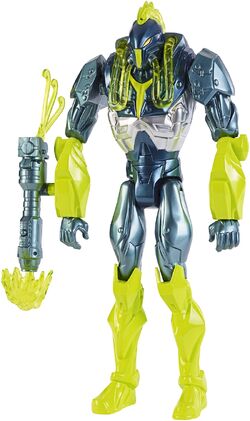 Toxzoid Launch Toxzon or just Toxzon is an action figure based on the character with the same name. It was released on 2016 on the first wave of action figures.

Toxzon has a shining dark green helmet with yellow eyes, a light green stripe on the center of his face and a transparent, green mohawk sticking out from the top of his head. He has a pair of hoses sticking out of from his face to his shoulders, a V-shaped light green marking on his chest and silver armor on his lower torso. He has dark green armored parts on his upper arms, green forearm pads, dark green gloves and green boots. He has eleven points of articulation and comes with two accessories.

He comes with a dark green blaster which can fire a green projectile with the face of a Goopanoid on it. It can also reveal three claws and can be inserted on his left arm.

Add a photo to this gallery
Retrieved from "https://max-steel-reboot.fandom.com/wiki/Toxzoid_Launch_Toxzon?oldid=30966"
Community content is available under CC-BY-SA unless otherwise noted.