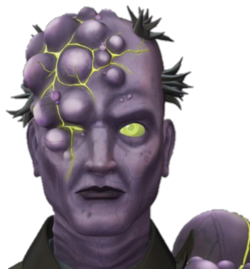 Toxic Zombies are minor villains introduced in Season 1. They debuted on Cleaning House.

After Tytus Octavius Xander was fired from THI, he decided to get his revenge by releasing a toxic gas on the whole building, which, when inhaled by humans, would turn them into zombies. Many persons on the building were infected, but Max, Molly and his friends weren't infected, but eventually, only Max wasn't infected. Later on, when Max temporarily knocked down Toxzon, he tound the cure of the virus, which was located on Fishy. The cure worked and everyone on the building were turned into normal humans again.

Later on, Toxzon passed weeks trying to perfect the virus to later convert Molly, Max's mom, into a zombie. To perfect it, he infected many people residing on Copper Canyon, which resulted into zombies with enhanced abilities, which Max and Steel struggled to defeat. Later on, Toxzon managed to perfect the virus and later used it on Molly, which converted her into a toxic being just like Toxzon, whom he called by "Toxziana".

In their initial form, the virus only affected the appearance (as well the way of acting) of the user, changing the skin into a purplish and veiny version. The infected person also would have blank eyes.

When Toxzon improved the virus, the transformation was more visible, with the user nearly becoming bald (with a few hair on their head), having many purple blisters spreading around their body (with various sizes), and the green eyes. Also, they would also have a few veins in different parts of the body, which were green. The user also could get seemingly more powerful than the previous version of the virus.

Retrieved from "https://max-steel-reboot.fandom.com/wiki/Toxic_Zombies?oldid=26791"
Community content is available under CC-BY-SA unless otherwise noted.