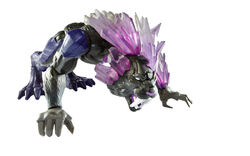 Tiger Strike Extroyer is an action figure based on Extroyer in his Black Tiger mode. It was released in 2013, and is a part of Stealth line.

The figure is mostly black with purple details on arms, legs, and feet, has grey details on the legs and hands, and also, a tiger head on Extroyer's chest. Since this figure is based on an animal, various aspects on Extroyer were changed, like the hands and feets. The figure have fourteen points of articulation, and comes with one accessory and threep projectiles.

The figure is able to be transformed to the tiger version, and also, when transformed, is able to launch one projectile through his mouth. There is also tail that can be attached to Extroyer's back, and that can be used as a sword.

Retrieved from "https://max-steel-reboot.fandom.com/wiki/Tiger_Strike_Extroyer?oldid=18209"
Community content is available under CC-BY-SA unless otherwise noted.