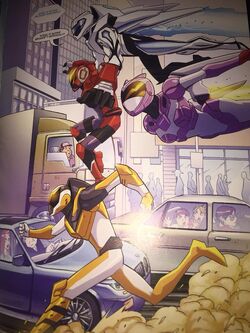 The Superbrawl Strikeforce is a small group of three superheroes who made their first appearence in the Hero Overload graphic novel. The group consists in Power Wing, Knockout and Quickfire. At first, they presented themselves as Max's allies and helped him in combating crime on Copper Canyon, but they were secretly planning to betray him and take over, also eliminating Max in the process.

While Max and Steel were fighting against Dread and Extroyer, a group of three superheroes arrived and helped them in defeating the duo. In the beginning, Max and Steel refused their help as they didn't knew what they were up to, but he eventually agrees to help them and becomes their mentor.

They team-up to fight crime in Copper Canyon and eventually Max and Steel finds out that were allied with Miles Dread and were planning to become the town's new heroes and then destroy Max Steel in the process. However, they don't succeed, as Max convinces them that Dread didn't even cared for them in first place, and they end up helping Max in defeating him.

Retrieved from "https://max-steel-reboot.fandom.com/wiki/The_Superbrawl_Strikeforce?oldid=30096"
Community content is available under CC-BY-SA unless otherwise noted.