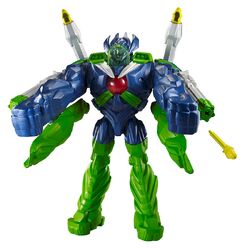 Tank Makino is one of Makino's action figures released in the first half of 2016. It was released as a part of Connect-Tek subline.

Makino's head is exactly like other of his releases, with him having a blakc face with yellow eyes and his Ultralink located on his forehead. He has green missiles launchers on his shoulders, a pair of silver pieces on his upper torso that goes to his red energy core and a pair of green pieces on his lower torso. He has green pieces attached to his shoulders and forearms. The half of his thigs and rest of his legs are completely green. He has three points of articulation.

Makino can attach two cannons on his shoulders with both of them capable of launching yellow missiles. When his legs are pressed together, a cannon on his forearms will be revealed. He also counts with a small screen that is hidden on his sphere, which, when revealed, will change the color of the sphere.

Alongside with Strength Reveal Max, Tank Makino was promoted in a 30-second TV spot.

Add a photo to this gallery
Retrieved from "https://max-steel-reboot.fandom.com/wiki/Tank_Makino?oldid=29184"
Community content is available under CC-BY-SA unless otherwise noted.