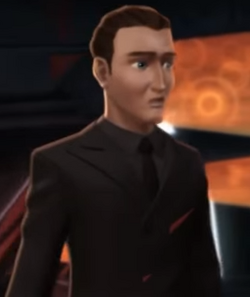 The THI Technician is a unnamed minor character introduced in Come Together Part One. He is one of THI Workers and he is voiced by Omari Newton.

He firstly appears after Jason showed a commercial of THI, praising his hair, saying that it was impecable. Later, he was the responsible of founding the source of T.U.R.B.O. Energy (Max) on Copper Canyon.

He makes a brief cameo seen walking in THI and quietly observing Tytus talking with his plastic goldfish, Fishy.

He has brown hair and green eyes, and uses the same clothes as other THI Workers, with the exception of the black necktie.

Retrieved from "https://max-steel-reboot.fandom.com/wiki/THI_Technician?oldid=28480"
Community content is available under CC-BY-SA unless otherwise noted.