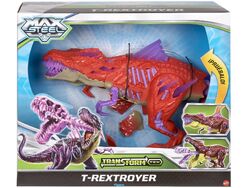 T-Rextroyer is an action figure based on Extroyer in his Tyrannosaurus Rex mode. This figure was released in 2015 at the first wave of figures and is a part of Transform-Tek line.

The figure is mostly brown with purple spikes and bones. His size is relatively small when compared to the other figures, and the articulation is very limeted because of its gimmick. He has only four points of articulation, and comes with three accessories.

When the spikes located on his rib are pressed, he shoots a purple skeleton. He also has a button on his body that when pressed, will launch three pieces from his laterals, revealing a purple cavity.

Retrieved from "https://max-steel-reboot.fandom.com/wiki/T-Rextroyer?oldid=23654"
Community content is available under CC-BY-SA unless otherwise noted.