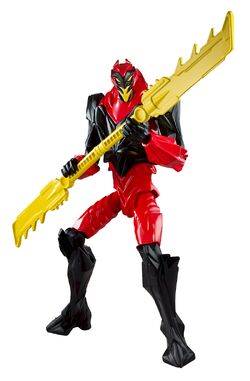 Sword Dread is an action figure based on Miles Dread using Makino Mode. It was released on 2016 on the first wave of action figures.

Dread has yellow eyes, black details on his forehead and mouth, and a yellow cavity where his mouth should be. His armor is mostly red, but he has black parts on the shoulders to elbows, black gloves and boots and his signature device located on his chest, having small and slim openings on the sides. Dread also looks thinier than his animated counterpart, but this is due to the fact that this is a budget figure and comes in a small package. He has twelve points of articulation and comes with two accessories.

He come with two long yellow swords which can be connected together to create a larger version. The black piece on his chest can be moved to reveal a yellow cavity, where both swords can be inserted.

Add a photo to this gallery
Retrieved from "https://max-steel-reboot.fandom.com/wiki/Sword_Dread?oldid=26959"
Community content is available under CC-BY-SA unless otherwise noted.