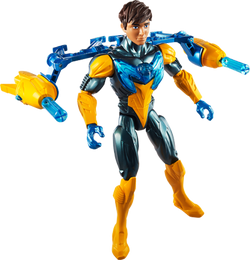 Surprise Attack Max is an action figure based on Max Steel. It was released in 2015 in the second wave of action figures, and is a part of Transform-Tek line.

In this toy, Max Steel's armor mainly features grey, orange, and blue, and has the same body type as most of Max Steel figures. The figure also has a secret weapon attached to its back. The figure has twelve points of articulation, and comes with two missiles, and one accessory.

The figure has a secret launcher on its back, which is able to assume two positions, and launch two missiles. The figure also comes with removable goggles.

Retrieved from "https://max-steel-reboot.fandom.com/wiki/Surprise_Attack_Max?oldid=23793"
Community content is available under CC-BY-SA unless otherwise noted.