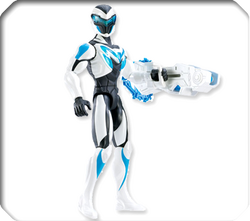 Stun Capture Max is an action figure based on Max Steel in his Turbo Base Mode. It was released in 2014 in the second wave of figures, and is a part of Aqua Invasion line.

In this figure, Max Steel has the same design as the Turbo Base Mode as seen in the series, with the addition of the mask. The figure has standard articulation, and comes with four accessories, and one projectile.

Retrieved from "https://max-steel-reboot.fandom.com/wiki/Stun_Capture_Max?oldid=28961"
Community content is available under CC-BY-SA unless otherwise noted.